The Devil’s Pilgrims- A true Story 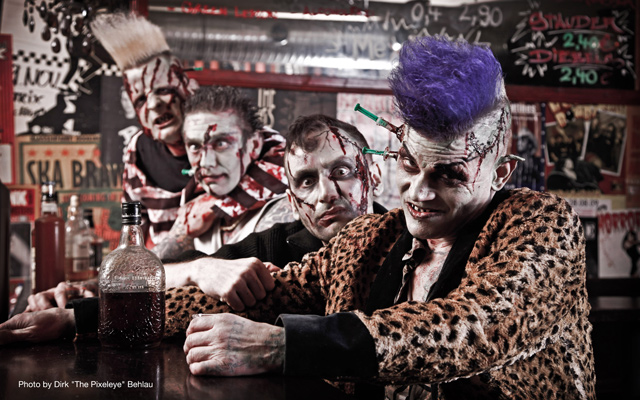 Driving in a loaner car down the autobahn between Eindhoven Holland and Oberhausen Germany, two malcontents of a sinister nature barrel down the asphalt on a wild tear to an abandoned chapel far within the German countryside. Wide eyed and unaware of the ensuing madness, our couple cut deeper and deeper toward destiny; a Halloween night with a feral gang of misfit hotrod psycho freaks.

Before I met my wife, I had no idea that a band like Demented are Go! even existed. They were a part of a world that was completely under my radar and had I not met this extraordinary woman, I would have carried on my life in a type of terrible ignorant boring bliss. Filiz spins psychobilly whenever she DJs, and it was this amazing powerful energetic music that came from her speakers that compelled me to take that courageous first step to talk to her and find out more about this goddess that was forcing me to move my body with a kind of witchcraft of bass and guitar. While most DJs will sit there obsessing over how cool they look, Filiz bounces around behind her turntables like a woman possessed. She never gave a single fuck if you liked her music, she played it for herself and that feeling spread all over the room like an infestation of baby spiders. Once bitten, you can’t stop moving. I heard these guys blasting out of the stereo singing about high heels and burying their dead grandma under a staircase. I heard a snarling man that sang like some twisted mental-patient version of Tom Waits. I was infected.

The sun retreated and shadows fell, our duo pulled up to an old inn near their destination. It was time to get ready. With a skull and roses cowboy shirt he blackened his eyes and she cursed out a broken zipper and cleverly pulled out a backup dress. She would not let some shitty stitching rob her of this chilling Halloween's festivities. She zipped up a low cut miniskirt dress adorned with old sailor tattoo prints and our couple walked out into the forest on that cold October night. They were more frightening than anything that could have confronted them in the dark wood, and passersby kept their distance.

Demented are Go! aren’t just a band, they embody an entire way of life. They symbolize a fringe rebellion fueled by gasoline, hairspray and spent shell casings. The psychobilly culture is a subculture of a subculture and those who have the attitude and a psychobilly wedge are welcomed lovingly into the fold. There is one who is arguably their most powerful and undeniable leader. His name is Mark “Sparky” Phillips, and he fronts the legendary band Demented are Go! Sparky is a twisted Welsh goblin who spends most of his days skateboarding around Rotterdam and getting into fights. When he isn’t causing problems or getting kicked out of other countries for lewd conduct, he writes and sings for a number of psychobilly bands including Demented Scumcats and 69 Demented but he is best known for Demented are Go! whose name comes from a shortening of Demon Teds are Go. Teds being a nickname for people steeped in the rockabilly scene. At a young age Sparky was taken in by a bunch of teddy boys and since then his allegiance has been cemented with the world of psychobilly and over 50 years old, he hasn’t lost a single bit of energy or intensity. The new album Welcome back to Insanity Hall is a testament to that as well as his future plans for another album and some guests appearances with other bands. Sparky shows no signs of slowing.

The dastardly pair arrived at the old chapel in Oberhausen. Dripping with black paint and stained glass, this church was unlike any other. The entrance was swarmed by leather-jacketed zombie psychobillies in wedge hairdos. The ladies were smothered with crimson lipstick, victory rolls, and fishnets. As the doors opened, they could feel the chunking upright bass electrify the amplifiers and pound against their chests. The opening act were blasting through their set and the floor was besieged by Dax and Hairnet. The wrecking pit was alive and pulsating with the vicious punches of hundreds of fists recklessly thrown into the chests and faces of fellow ghouls to the beat of the energized drums onstage. They all awaited their high priest, their prophet, their guardian fucking angel.

Psychobilly is a genre which fuses punk with rockabilly and relies heavily on old horror staples: Zombies, vampires, murder most foul, Hell, death and the Devil. The themes go extremely well with the music and what we get is a scary creepy badass sound which should never be left out of any Halloween playlist. However, just like a Christian who only attends church on Christmas, I feel like a fan of psychobilly the most around Halloween. The real Demon Teds live this life everyday, they are defined by it and their attitude is shaped by it all year round, but to witness them at a Demented are Go! concert on Halloween night is something truly epic. It’s the one time of year they can all congregate and be who they want to be without being stared at or shunned. They can exist in their world for one glorious night and the energy from it is amazing.

Their long wait was over. After midnight they emerged from the shadows and took the stage. Demented are Go! were dressed all as murder victims who had recently escaped from an insane asylum. At the forefront was Sparky, with hypodermic needles sticking out of the side of his head and pointed goblin ears he began the set. The upright bass crushed their rib cages and the growling hoarse voice of Sparky filled the chapel with malicious intent. They filled the frosty dark night with tales of murder and mayhem, the wrecking pit teemed with violence and the beer and whiskey spewed from the bar trying to quench the insatiably thirsty hoard. Between each song, Sparky took a long swig from an unmarked bottle and removed another article of bothersome clothing. Demented are Go! led their zombie march through the night, and our couple, who had traveled a thousand miles on this diabolical pilgrimage grinned at one another and then found themselves, lost in a dark temple. 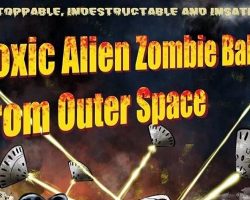 Move over Hollywood–Toxic Alien Zombie Babes are going to blow you away! 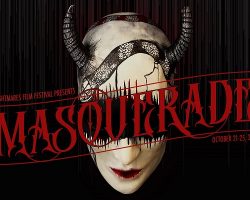 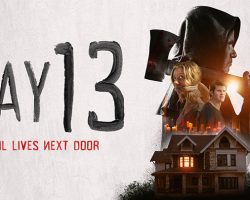 Move over Hollywood–Toxic Alien Zombie Babes are going to blow you away! August 08, 2020

Super Channel and Blood in the Snow partner to bring virtual festival for Halloween! July 19, 2020

Poster and Trailer for Disappearance at Clifton Hill July 01, 2020

Artsploitation to Release “Welcome to the Circle” June 14, 2020