Last month, I attended the Black Owl Market on Capitol Hill in Seattle, WA. I was so proud of my city as its burgeoning horror, occult, and dark art community came together to support the local artists and makers that add so richly to our collective aesthetic. The market was made possible by Simon Berman, Jason Soles (The Art of Jason Soles), and Anita Arora (Sigil). Simon Berman happens to be the heart and soul of Strix, an independent publishing company from Seattle.

“I’m a man fascinated by the power of narrative to deeply immerse. Strix Publishing is essentially my platform to publish books that are immersive not just in their content but in their physical presentation.”- Simon Berman

Simon Berman founded Strix publishing in 2015 so that he could publish The Book of Starry Wisdom, which is a compilation of H.P. Lovecraft’s stories brought to life by a bounty of prominent Lovecraftian scholars and horror writers. Illustrated by Valerie Herron, it is a stunning collection which oozes with the kind of love that can only be accompanied by obsession. In fact, Simon only seeks to work with people who are utterly bedeviled with their subject matter. Being totally possessed is the common thread in all of Strix Publishing’s collaborators, which is evident in their contributions as each publication sucks you into a parallel shadowy world. Simon speaks exceptionally of Strix’ creators:

“Eliza Gauger’s Problem Glyphs is a work of tremendous, frightening pathos. Warren Ellis commented in his introduction to the book, “this is going to kill her.” Orrin Grey is obsessed with classic horror stories, both cinematic and literary. Orrin’s love of that genre—and more specifically, its atmosphere— is pure and sincere, even if it’s tempered by his own personal demons. Jason Soles is a talented sculptor who is obsessed with death and the dead in ways that beg deep consideration.”-S.B.

(Artwork from The Book of Starry Wisdom by Valerie Herron)

Simon Berman told Nevermore-Horror that he had recently traveled to the remote French town of MontsÃƒ©gur, so that he could meet with director Richard Stanley, who is responsible for cult gold such as Hardware (1990) and Dust Devil (1992). The encounter has possibly triggered a collaboration between the two, however more will be known about that in the future. The pilgrimage must have made a serious impression, because Simon stated that it guided him to understand what his aspiration was with Strix Publishing. It is a purpose that is summed up in the publisher’s logo, choosing the strix as a fitting symbol for the ethos of Simon’s trade.

“The mythological strix was a creature of ill-omen, haunting the night. Some thought it a bat, others an owl, and that difficulty in precise classification beyond a general agreement that it was a dangerous nocturnal predator was interesting to me. I wanted my books to toe the line between art book and forbidden tome, so the strix seemed like a good mascot.”-S.B.

MontsÃƒ©gur, by the way, is the site of final showdown between the Cathars and the Catholic Church during the Albigensian Crusade. 244 Cathar heretics were burned in a giant bonfire in one night. It’s the kind of place that lures in people like Berman and Stanley, that energy is then repackaged into each book that Strix spawns.

You can check out the titles and other merchandise on Strix Publishing’s online store here. 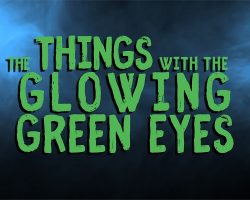 The Things With The Glowing Green Eyes ~ Review 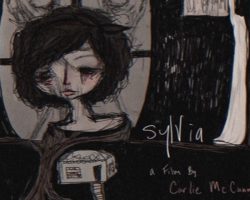